So, what does go through your cats mind when it decides to
eat a dangerous flower such as a lily?

When Charlotte’s (Kabul Small Animal Rescue) cat Hermes was living with her,
she had her PhD graduation party. One of the gifts brought to
her was a bouquet of flowers. It just so happens that there
were a couple of lillies stashed in between the rest of the flora.
Lillies are usually deadly to cats if eaten.

Hermes, one of her two cats who lived mostly in the kitchen cabinets,
utensil drawers, and even the occasional empty refrigerator shelf,
decided he wanted to check things out.

Well Hermes, for some reason, was drawn to these lillies, and
he decided to taste test one of them.  He did more than just taste,
he ate muc of the lily. Bad decision.

With all the commotion (and adult beverage) of the occasion, no one noticed
Hermes until he was getting sick, which was several hours later.

An emergency room visit later, a stomach flush, and lots of I.V. fluids
given, he managed to use up another of his many lives. He survived – barely.

Today is Hermes is fine, and he is kept away from ALL flowers. He no longer lives
with Charlotte, but with us. Charlotte is busy in Afghanistan rescuing
cats and dogs (Kabul Small Animal Rescue). Hermes, and his step sibling Gracy,
were Charlotte’s rescues from Greece about 11 years ago when she was
a graduate student, and they are both about the same age. 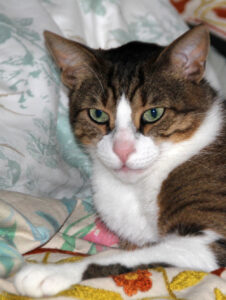 Here is another example.

Dangerous thinking of my cat

I was vacuuming out some ductwork in the house a few years ago when one of our cats
(Harlequin) decided to check out the inside of the duct. She crawed into the vent (I should never have turned my back) and proceeded to explore.

Fortunately, I have a basement and it was not too hard finding the correct vent opening
that she had disappeared into. The problem was that now she was not happy, and was
trying to find her way out. This meant that she was on the move.

Now, that would not have been a problem, except for the fact that all of this
ductwork is connected to a furnace (which I made sure was turned off).
Fortunately, she did not find her way to the main part of the furnace where
she could have gotten hurt.

Long story short – she got stuck, but after about two hours of coaxing, calling,
begging, pleading, and frustration, I did finally get her out.  Believe me when I say
that dismantling ductwork is no fun – especially when your cat is inside of the duct!

So, what IS your cat thinking?

Cats do think. they are actually smarter in many ways than most of us,
but they do get shortchanged by most people when it comes to the
“Smarts” category. Sometimes they do seem to do some really
“Dumb” things, but how many “Dumb” things have you ever done?
I’m still doing them, and more often then my cats.

Off the top of my head I was going to say that much of what cats do
will relate to their instincts. Then I began thinking.

“What was I thinking?” It dawned on me, why just instinct?
Some activity is instinct, but maybe cats like to find out what is around
them just like you do.

Cats don’t usually have choices as to where they live. When you give them
a home, they depend on you to feed them and keep them safe.
But, they also want to know all of their possible “Escape Routes” just in case
this new place doesn’t work out – Like Harlequin. I just remembered that
she had not been in the house for very long.

Something else to consider, and that is how adventurous your cat might be.
Younger cats tend to be busier, but not always. The same goes for the
older generation of cats, except that they tend to be more laid back, but
again, not always.

Do you like adventure in your life? Sure you do. What makes you think that your
cat doesn’t like a little adventure, stimulation, and to be exposed to different
things in his/her life?

As a matter of fact, research has been done showing that cats actually do like a bit of
novelty in their lives. This was demonstrated by a test where cats were given a
choice of familiar toys, or new and novel toys. Cats showed a higher than expected
tendency to choose the novel toys.

Just as you do things on impulse, so do your cats, and when you act on impulse,
it can often lead you into circumstances that you did not expect to encounter.

You may even ask yourself, “Why did I make such a dangerous decision?”

If you own a cat (and you probably already know, and do this), but it is important
to pay attention to your environment’s surroundings. Your cat cannot always
see some of the dangers that are obvious to you. Therefore it is up to you
to remove as many dangers to your cat as you can identify.

Your cat, just like you, is likely to get into trouble on occasion. Think of these times
not as your cat has caused you trouble, but that your cat has taught you something
about him or her.

We have been pretty lucky with our cats. Hermes did get out once and managed
somehow to get to where our dogs stay. Well, one of our dogs almost lost her eye.
He just got scared as both dogs came over to see what the commotion was
all about.

Hermes has always been a bit of a “Problem Child”, but is still a pretty sweet cat.

We can  only be so careful, and can only do so much to keep things safe.
One more thing that you may wish to do in case the unthinkable happens,
and that is to keep your vet’s (and emergency vet’s) phone numbers handy.

On occasions where you have visitors stay overnight, this can disrupt, and
provide additional opportunities for your cat to get into things he/she
shouldn’t. Never be afraid to educate your guests on your “Cat Proofing”
procedures. The last thing that your guests want is to spend their time
with you in the vet’s office rather than over that leisurely cup of coffee.

Always be on the alert for harmful situations that your cat might find interesting,
so that any decisions your cat makes will not be dangerous ones.

Your FREE copy of the latest edition of Cat Purrs.
This edition is titled:
Holiday Allergies

Enter your name and email below for immediate download